All about Bengali Fish

Fish is the dominant kind of protein, and is cultivated in ponds and fished with nets in the fresh-water rivers of the Ganges delta. Almost every part of the fish (except fins and innards) is eaten; the head and other parts are usually used to flavor curries. The head is often cooked with dal or with cabbage. 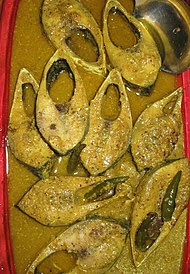 Shorshe Ilish, a dish of smoked hilsa with mustard seeds paste, has been an important part of bothBangladeshi and Bengali cuisine.

Salt water fish (not sea fish though) hilsa (hilsa ilisha) is very popular among Bengalis, can be called an icon of Bengali cuisine. Ilish machh (hilsa fish), which migrates upstream to breed is a delicacy; the varied salt content at different stages of the journey is of particular interest to the connoisseur, as is the river from which the fish comes - fish from the river Pôdda (Padma or Lower Ganges) in Bangladesh, for example, is traditionally considered the best. To some part of the community, particularly from West Bengal, Gangatic Ilish is considered as the best variety. 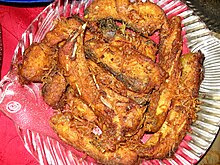 There are numerous ways of cooking fish depending on the texture, size, fat content and the bones. It could be fried, cooked in roasted, a simple spicy tomato or ginger based gravy (jhol), or mustard based with green chillies (shorshe batar jhaal), with posto, with seasonal vegetables, steamed, steamed inside of plantain or butternut squash leaves, cooked with doi (curd/yogurt), with sour sauce, with sweet sauce or even the fish made to taste sweet on one side, and savory on the other. Ilish is said be cooked in 108 distinct ways. Also, there are different ways of cutting vegetables, which is important for the dish you are cooking. A cut for the "Chochhori" cannot be used for the "Dalna". Each different food has its own cut of vegetable, to keep with the cooking time and procedure of each dish.

Posted by Prosenjit Bhowmik at 9:45 AM 2 comments:

Method:
1.Clean the fish pieces and pat dry. Grind the garam masala ingredients into paste with water and set aside.
2.Marinate the fish with salt and turmeric powder for 10 minutes.
3.Heat the oil in kadai and shallow fry the fish and set aside.
4.To the same oil, add the sugar, bay leaves, cumin seeds, salt, turmeric and ground paste, saute for couple of minutes.
5.Add the curd with half cup of water and bring to a boil.
6.Add the fish pieces and simmer for 5-6 minutes.
7.Serve hot with rice.

Posted by Prosenjit Bhowmik at 9:35 AM No comments: 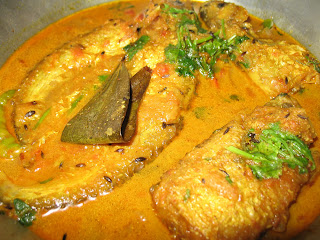 How to make bengali fish curry :

Freshwater fish are fish that spend some or all of their lives in freshwater, such as rivers and lakes, with a salinity of less than 0.05%. These environments differ from marine conditions in many ways, the most obvious being the difference in levels of salinity. To survive fresh water, the fish need a range of physiological adaptations in order to keep the ion concentration of their bodies balanced.41% of all known species of fish are found in freshwater. This is primarily due to the rapid speciation that the scattered habitats make possible.

The mrigal ( Cirrhinus cirrhosus ) is a freshwater fish species in the carps family (family Cyprinidae) of order Cypriniformes (carps & minnows). The mrigal is an introduced specie and is actually native to large river systems of India, Thailand and Myanmar. It is a very popular food fish (Mirgal or Mrigal Back Gutted Scale On) in Iraq and Mirgal (Mrigal) Belly Gutted is popular in another middle east country.

Rohu (Labeo rohita, Bengali: রুই) is a fish of the carp family Cyprinidae, found commonly in rivers and freshwater lakes in and around South Asia and South-East Asia. It is a herbivore. It is treated as a delicacy in Bangladesh and the Indian states of West Bengal, Orissa, Bihar and Uttar Pradesh. The Kayastha community of Uttar Pradesh treats it as one of their most sacred foods: to be eaten on all auspicious occasions.In Hindi it is called rehu (rawas is the Indian Salmon, which is quite different). It is called rohi in Oriya, rui in Bengali, rou in Assamese and Sylheti , rohu it self in malayalam, and is grown in kerala in agricultural basis . It popular in Thailand, Bangladesh, northern India and Pakistan. It is a non-oily/white fish.
Fried Rohu dish, Bangladesh.The roe of rohu is also considered as a delicacy by Oriyas and Bengalis. It is deep fried and served hot as an appetizer as part of an Oriya and Bengali meal. It is also stuffed inside pointed gourd to make potoler dolma which is considered a delicacy.Rohu is also served deep fried in mustard oil, as kalia which is a rich gravy made of concoction of spices and deeply browned onions and tok, where the fish is cooked in a tangy sauce made of tamarind and mustard. Rohu is also very popular in Northern India and Pakistan such as in the province of Punjab. In Lahore it is a specialty of Lahori cuisine in Lahori fried fish where it is prepared with batter and spices. It is also a very popular food fish (Rohu Back Gutted Scale On) in Iraq.

Tilapia (pronounced /tɨˈlɑːpiə/) is the common name for nearly a hundred species of cichlid fish from the tilapiine cichlid tribe.Tilapia inhabit a variety of fresh water habitats including shallow streams, ponds, rivers and lakes. Historically they have been of major importance in artisan fishing in Africa and the Levant and are of increasing importance in aquaculture (see tilapia in aquaculture). Tilapia can become problematic invasive species in new warm-water habitats, whether deliberately or accidentally introduced but generally not in temperate climates due to their inability to survive in cool waters, generally below 60 °F (16 °C).

Pangasius hypophthalmus is a catfish. This fish is also known as Siamese shark or sutchi catfish in the aquarium hobby or as tra, swai (from Thai ปลาสวาย "plaa sawaaj"), or striped catfish in the food fish market, and occasionally incorrectly as basa and panga (these names should be rather used for Pangasius bocourti and Pterogymnus laniarius, respectively). The species is found in Southeast Asia in the Mekong basin as well as the Chao Phraya river, and is heavily cultivated for food there. It has also been introduced into other river basins as a food source and is common in the fishkeeping hobby. It is named for its glow or iridescence exhibited in juveniles. 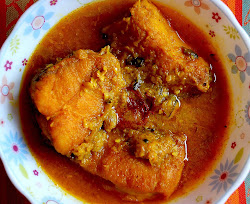 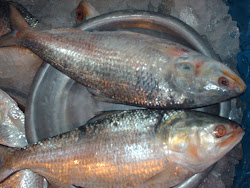